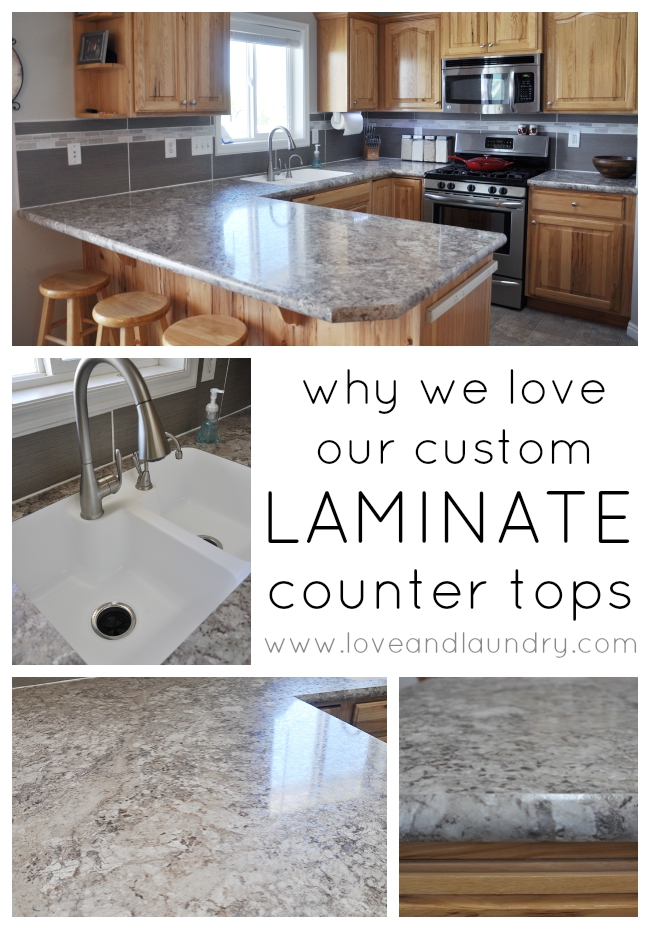 I’ve been so excited to blog about this! It’s been in process for  couple of weeks and I think we finally got things completely finished, so I can finally blog all about it!

Yes….we did actually choose to get laminate counter tops. We really researched our options and there are several reasons why we ultimately chose to go the laminate route. And I absolutely love our new counter tops!! Let me explain why… But, before I get into the nitty gritty, here’s a before and after: 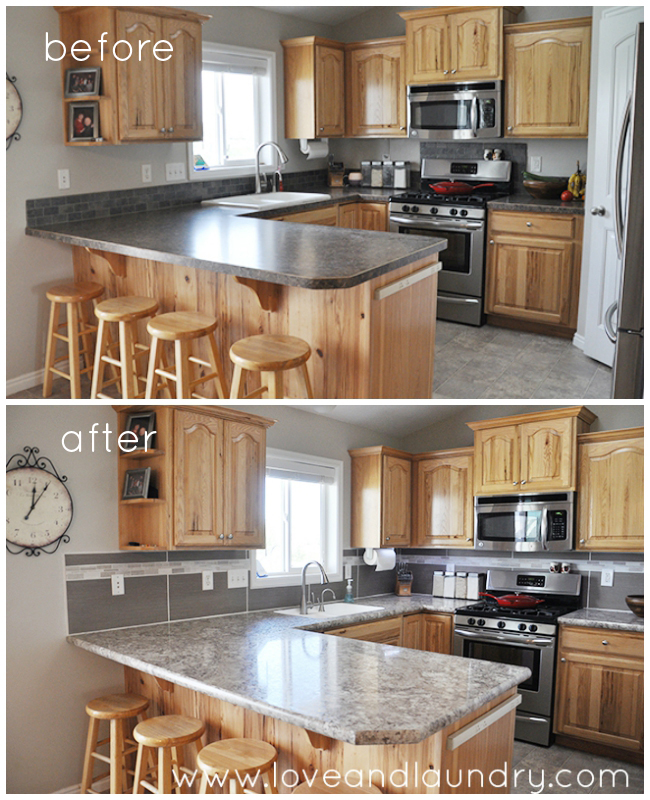 And to be honest, ours probably would have lasted longer. They were certainly functional and it wasn’t like it was completely necessary for us to replace them. There were some problems, though. We took out the laminate back splash several years ago because it started to peel off. And we had a flaw right in the middle of our bar. It was just a cosmetic flaw, but for some reason we never noticed it when we signed off on our house. It’s bugged me for years! Some of the counter top sides were also starting to peel up. We have glued the pieces by our sink and dishwasher back on over and over.

We sell fireworks every summer and often use the extra money we make to do a fun project in our house. This year we decided it would be counter tops! We looked at lots of different options. One of our favorite was actually stained concrete. We had a company come bid it for us. It was suuuupppper expensive! More than stone by a lot. Even doing a stained concrete overlay on top of our existing counter tops was pretty spendy. And we weren’t sure how long that would last. Plus, we really wanted an under mount sink and that wouldn’t have been possible with a concrete overlay.

Honestly, I was pretty sure we were going to have to wait until we saved up quite a few thousand dollars to get new counters. Counters are just as much money – or more – than the cabinets! It’s crazy how expensive they are!

One afternoon, we were at my mother-in-law’s house admiring her counter tops. I don’t know why I didn’t think to ask her opinion because she is amazing at decorating and remodeling. Of course she would have known about where to find good counter tops that wouldn’t completely break the bank! She gave us the name and number of the guy who did hers and we called him up. He was out to give us a bid really fast and we couldn’t believe how much less expensive they were. It was $1500 for the counter tops, sink and labor. He is a busy, busy guy (of course!) and so we had to wait almost 2 months for him to come out and put them in. It was well worth the wait!

The counter tops we chose are called “Autumn Carnival” and we got it with the high-definition texture. In my opinion, the texture really makes it look like stone! And the guy in the showroom that helped us said that adding the texture would actually make our counter tops last longer. 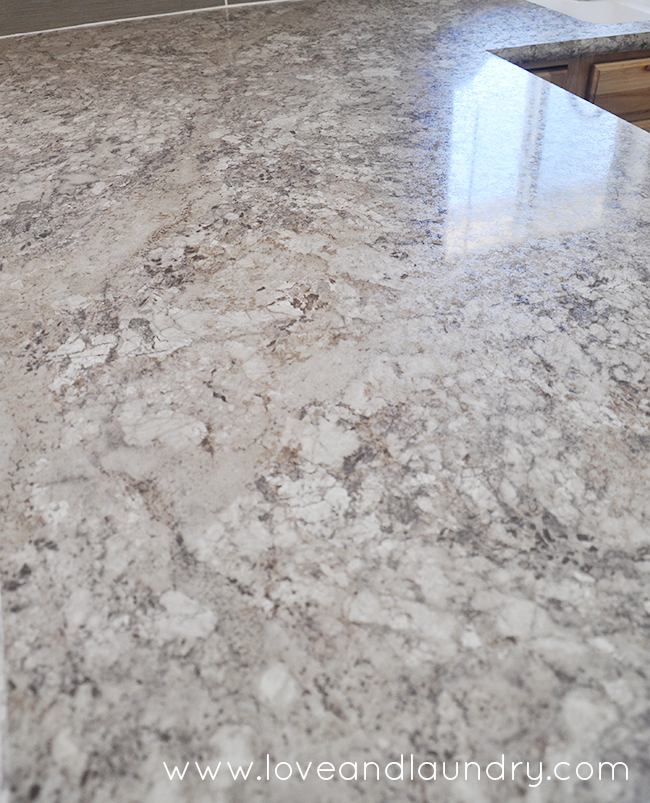 Laminate has really come a long, long way in the last 9 years since we bought our house! The laminate we chose has a pattern, but it is so huge that we could only find one place in our whole kitchen that it repeated. And that took some looking! I love the large grain stripes that are in it! So pretty!!!

The day the installer came was super crazy! His name was Dave and he was an amazing guy. He had scheduled to come at 7:00 am and arrived at 6:59 am. What contractor does that!?! Max broke his arm the night before and we were waiting to hear from an orthopedic specialist to get his arm set. So, I was in and out and he worked the whole day away until 6:00 pm. This was no quick job! It was really hard work! He’s an older guy and I heard him huffing and puffing away while he got them installed. He earned every single cent that we paid him! If you live in Southeast Idaho and you are interested in his contact info, send me a message and I’ll get it to you. I would very highly recommend him!

After going to the showroom, we decided on a crescent edge. 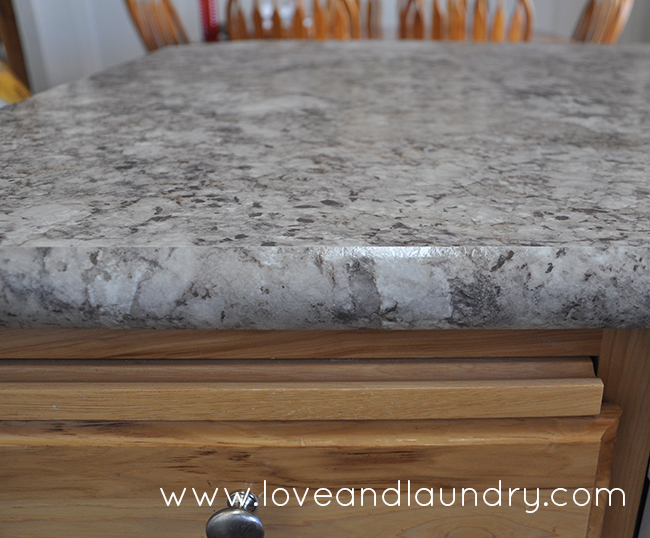 It was a little bit more expensive, but I really think that it gives our counters a more expensive look. They had several different edges to choose from and this was by far our favorite!

And let me tell you about our sink! 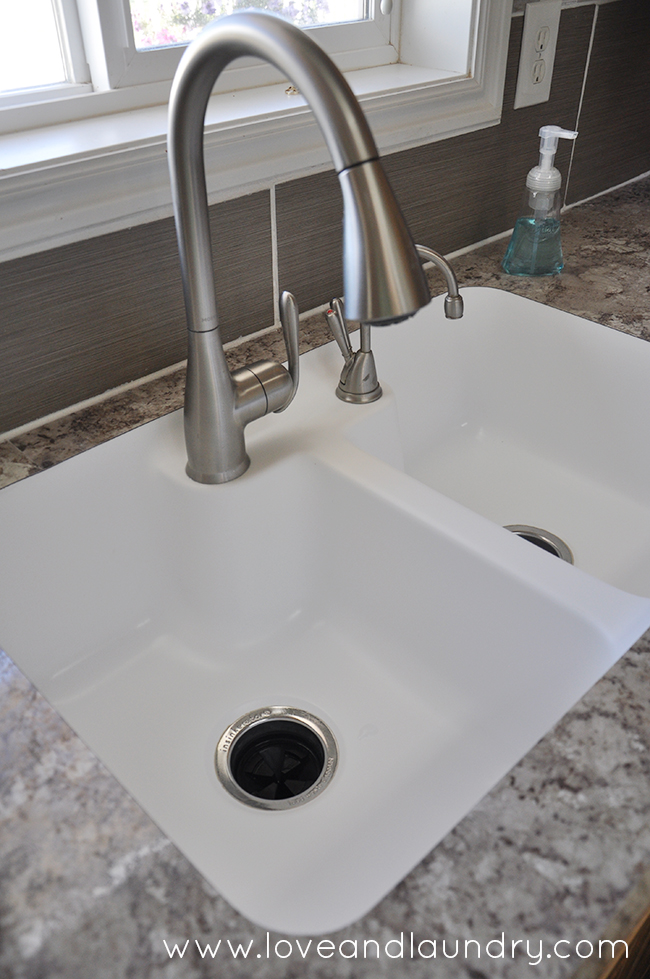 Look! It’s an under mount sink! For some reason, I had always thought that an under mount sink was only possible with stone counter tops. But, not anymore! Look at that gorgeous edge! I love it so much more than if we had decided to get stone. I’m sure that the slight gap between sink and the stone would have driven me crazy – major dirt and germ collector! By choosing laminate, we have a completely seamless edge between our sink and our counter tops. 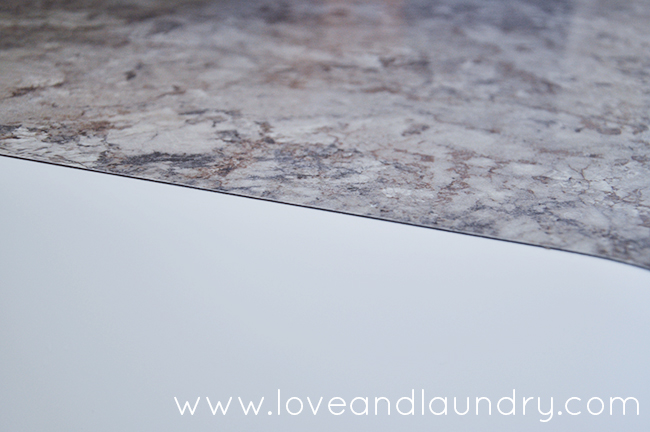 We really considered getting a single basin sink, but we decided on a Karran Hampton double basin white sink because we loved how this model had the faucet inside instead of on the counter tops like a lot of the other sinks did. 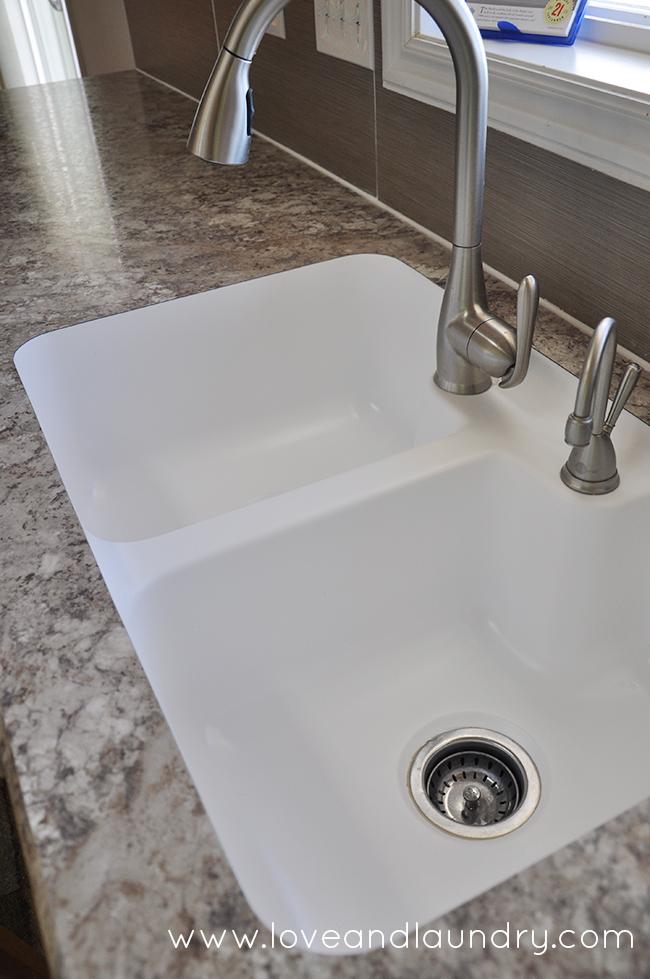 We have a hot water tap that we needed installed as well and the awesome thing about having custom counter tops is that our installer was able to accommodate that in our sink.

The other thing I love, love about our sink is that it is actually better to clean it with abrasive powders. It’s not shiny and abrasive powders (like Comet) will add to the patina and keep it nicer over time. The only thing we have to really be careful about is pouring boiling water into it. But, the installer suggested that if we run hot water before pouring boiling water then that would prevent any damage because it would gradually warm up the sink. This is the sink we used if anyone is interested (affiliate link).

So, all in all, we are very happy with our decision to get laminate over stone! They are just as beautiful and at the same time more durable. We were still able to get our under mount sink – but without the dirt catching gap that sometimes happens with stone. And we were able to save thousands of dollars! 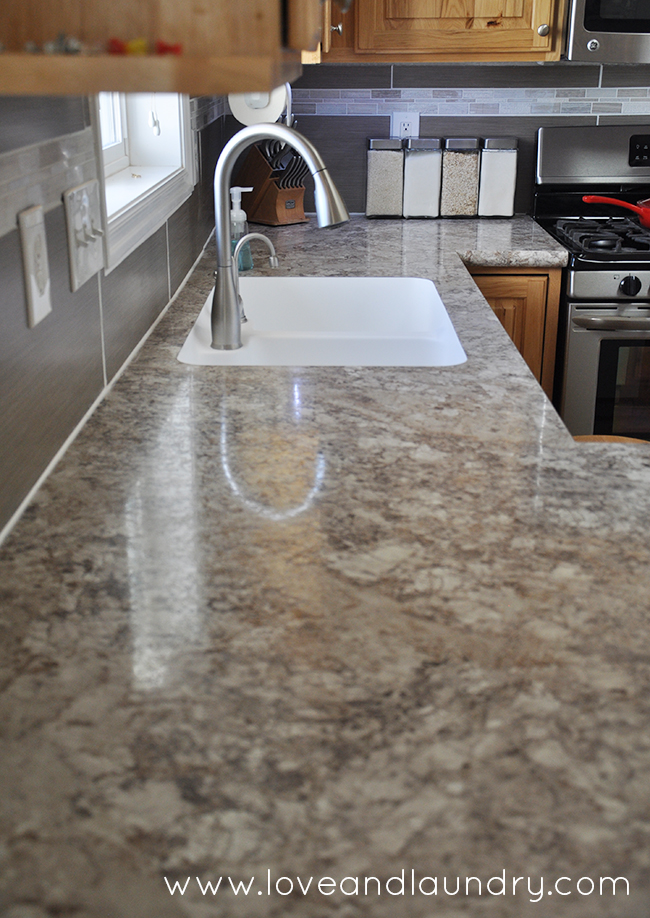