I have a confession to make. My husband is an eternal college student.

Okay, not really. But it sometimes seems that way!

When we met, he had just started working on his bachelors degree. After several years, and what seemed like an endless pile of homework, he graduated with a Bachelors in Sociology in 2005. We were so excited! We thought he was done with school.

A few years later, he decided that he wanted to be an elementary school counselor. We honestly weren’t sure what the requirements were, so he applied for a job when one came open. We were so ecstatic when he got it! Only then did we find out that he wasn’t even qualified for the job because he didn’t have a Masters Degree. They let him stay on for one school year under an emergency provisional status. Meanwhile, he found an online program, and got to work on his Masters. We didn’t know it at the time, but the program he got in was incredibly tough. Instead of the usual 30 credits, it was a 60 credit degree that required him to go through 2 weeks of “intensive” courses on the campus. The weeks were divided up between 2 summers. 2 1/2 years later, in the spring of 2010, he had his Master’s in School Counseling! What a lot of hard work and a huge sense of relief! We thought he was done with school.

Until a year later when he realized that his true calling is to become a Principal. So, in the fall of 2011, he headed back to school again. He is slated to graduate with his 3rd degree in the spring. Finally! And after 8 1/2 years we think he’ll actually, for real this time, be finally done with school! Now we’re just crossing our fingers that he can find a job as a Principal next fall so that we can pay off his student loans!

School is SO expensive! I joke sometimes that he should have gone into the medical field because of how long it has taken and how expensive school costs! Did you know that even if you’re poor, there are no pell grants available for graduate degrees? You can either pay it on your own, or take out loans to cover the tuition. But, I’m not complaining.  As a family we value education and we’ve felt so blessed that Dave has had all of the opportunity that he has.

But there are ways to save some money. 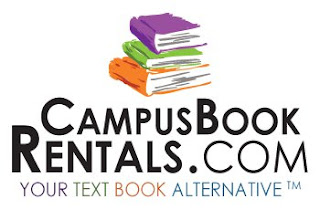 When CampusBookRentals.com reached out to me wondering if I would like to do a post, I knew it was a perfect fit for us! My hubby doesn’t need anymore text books since he’s only on his internship, but I would have sung to the high hills if I had know about this website before! Text books are ridiculously expensive!!

For example, take this book that my husband had to use:

I was also really impressed because CampusBookRentals.com is partnering with Operation Smile and donating 1,000 life saving cleft surgeries to children. So, not only do they help you save money, they give back in a big way!

So, if you’re in college, or know someone who is, I definitely recommend CampusBookRentals.com!

*I was compensated for this post by CampusBookRentals.com, but my opinions are my own. Hey, if I wouldn’t use it, I wouldn’t recommend it!*