I feel like there are a ton of little things that happen that I never post or talk about and I think it would be fun to start doing a month in review type post of some of those things. So, this was our October!

One of the biggest things that happen every October is our anniversary and this year was 15 years! I remember someone telling me that they had been married 15 years when Bria was a baby and I thought “Woah! You guys are old!”. Ummm…I’m here to eat crow because that 15 years flew by! I always think that we’re pretty much the same people that we were 15 years ago, but when Dave’s cousin saw one of our wedding pictures the other day, she said “Wow! You guys look completely different!” So, maybe we are getting older. But I like to think we are exactly the same (at least in looks) as we were 15 years ago. 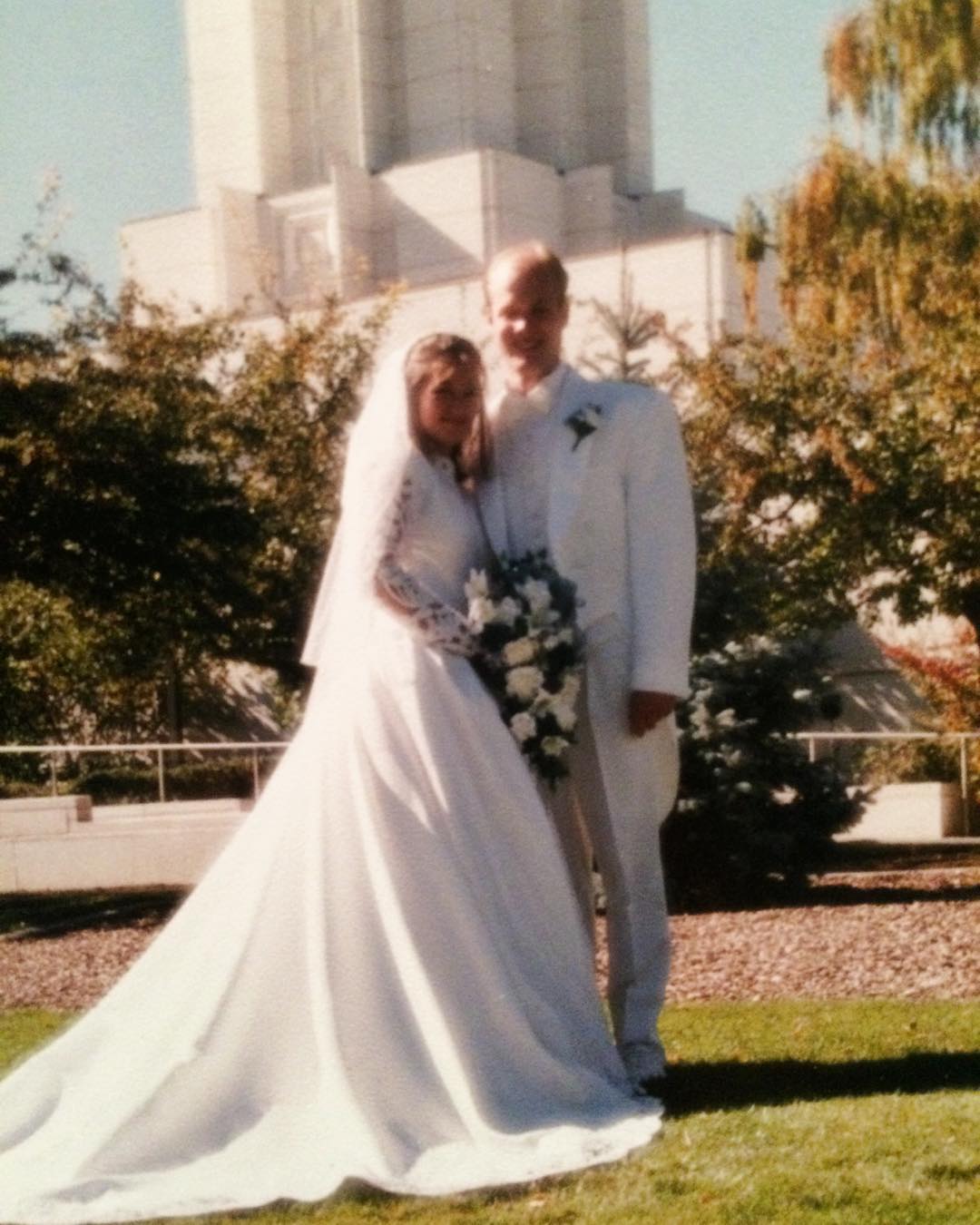 We have an anniversary tradition that every year we stay at a theme suite. It’s usually the same place, but sometimes we change it up a little bit. We’ve gotten so good at looking for deals that we usually don’t pay more than the cheapest price advertised for the year. The fun part is that we take turns being in charge and picking the room. This was Dave’s year so he set everything up and I was the one who got to be surprised. I love our tradition. I know that not everyone thinks that anniversaries are worth celebrating in a big way, but we do! We look at our anniversary like it’s a time to step back and celebrate us and our marriage! And we both look forward to it every single year.

This year we drove down to Logan, Utah and stayed at the Anniversary Inn in the Hacienda Suite. It was gorgeous and Dave pampered me with pretty much every extra that they had – it was our 15th anniversary after all. We got yummy gourmet chocolates and massages and there were roses sprinkled all over the room. It makes me want to go back just thinking about it! 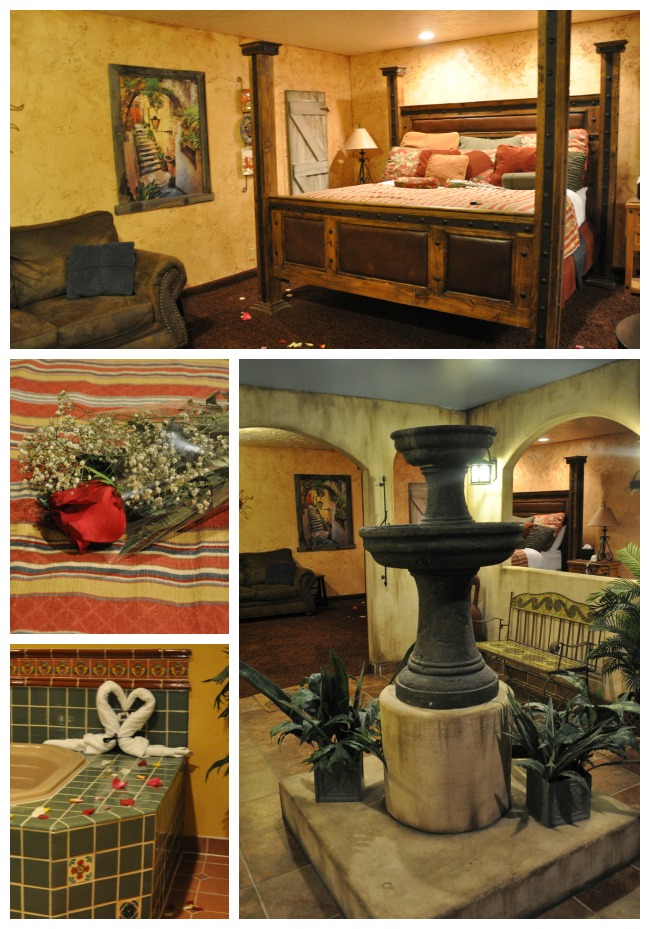 Of course, our kid’s school has a fall carnival every year. And we try to go if we can. But, the perks of being a principal’s kids is that our kids get to go to another school’s carnival as well! The kids absolutely love going to their dad’s school and tell pretty much every kid there that the principal is their dad. 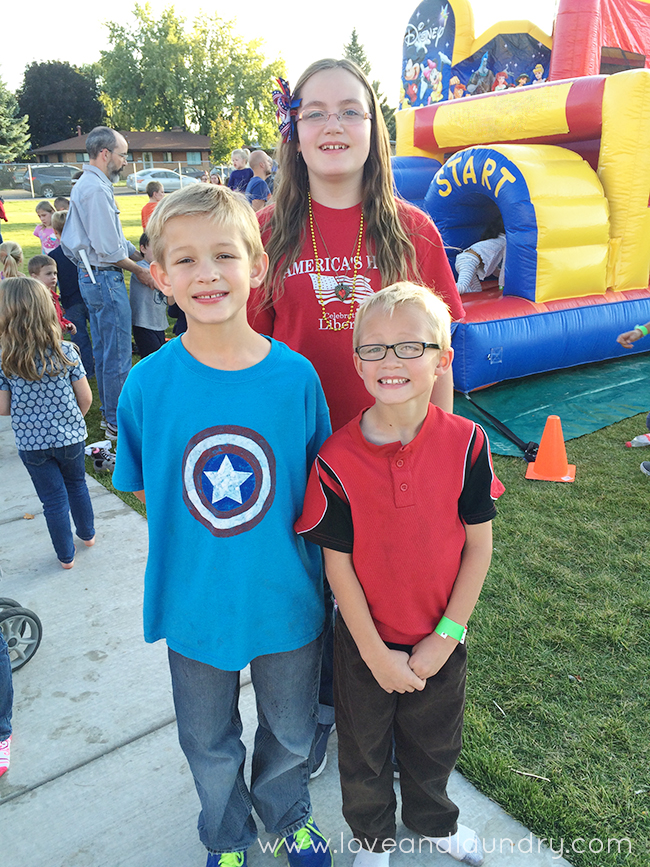 I surprised Bria and took her to see Once I Was A Beehive. I didn’t tell her I was taking her and asked her to jump in the car to run to town with me. She could tell something was going on and the boys made it so much more fun to surprise her! Max said “We’ll see you when you get back. I mean IF you get back! Haha!”. Dave hinted that the trip with me had something to do with bees and Bria was completely convinced that I was taking her to get a shot at the doctor’s office. I forget how fun it is to surprise my kids! 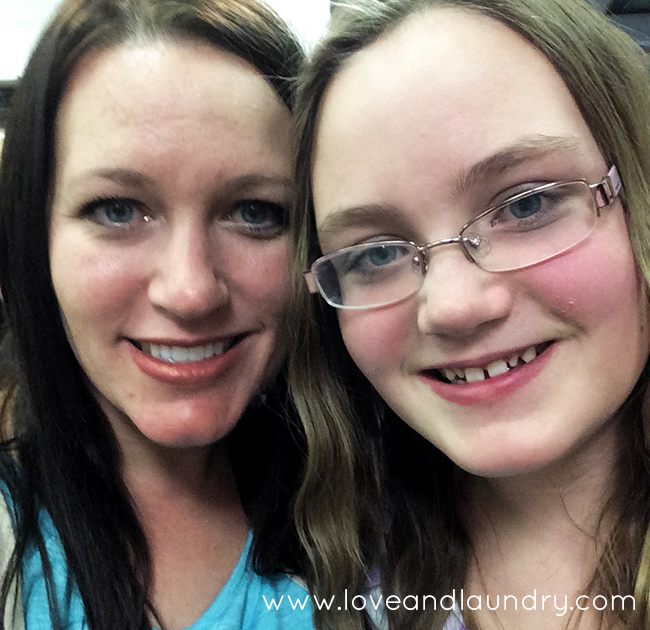 The reason I wanted to take her is because in our church when girls turn 12, they enter the Young Women program. The young women program is for girls 12-18. The girls who are 12 and 13 are called “Beehives”. Bria turns 12 in November and I thought it would be a fun introduction to some of the things she would get to do once she got to be a real Beehive. Some of my best memories growing up are of when I was in Young Women’s and I have been so excited for Bria to have some of those same experiences!

The movie was super, super cute! I recommend it for everyone. It’s not really religious at all. It’s more like an honest, funny and heartwarming look at what a girl’s Bible camp would be like. I’ve been excited for it to come out on DVD so I could have the boys watch it, too. Even my boys would love it! Here’s the trailer – but I almost feel like I have to say don’t judge the movie by the trailer. It doesn’t even close to do this movie justice!

My First Root Canal (and why I now hate the dentist)

In the middle of October, I had to have an unexpected root canal. I got a cavity filled at the end of August and that tooth never felt good after that. I had a toothache that got worse and worse until I couldn’t stand it any longer so I made an appointment with the dentist. He highly recommended a root canal and did it right then and there.

I’ve never had a root canal before. And I’ll be the first to admit that I think I am a total root canal wimp. Because – holy moley – that was horrible!! Not the actual procedure, but the recovery. Ugh! It seemed to take forever before my mouth felt better. This is my public apology to anyone I ever judged for hating the dentist. I didn’t get my first cavity until after Max was born and I used to think that people who hated the dentist had some sort of unexplained phobia. I was wrong. Getting a root canal is pretty much the worst thing ever!

After Logan got home from school, he asked me why I didn’t feel very good. I told him that I went to the dentist and that he hurt my tooth. And Logan said “I can tell that the dentist didn’t say sorry!” And you know what? Logan was exactly right! He didn’t say sorry. So, if you’re a dentist, it would be nice if you said sorry after you gave people root canals. Because it hurts. And to add insult to injury we have to pay for all of that pain. Saying sorry might make things just a little bit better. I’m just saying…

The evening after I got the root canal, Max was super helpful and volunteered to make dinner for me. He loves to cook any chance he can get so I think he looked at my root canal as more of an opportunity. But I was so grateful! Even though we ended up with some jello and a box of Suddenly Salad for dinner that night. My momma heart is just so happy to remember how proud Max was to be able to step up and help. I love that he loves to help and I hope he never outgrows that spirit of service! 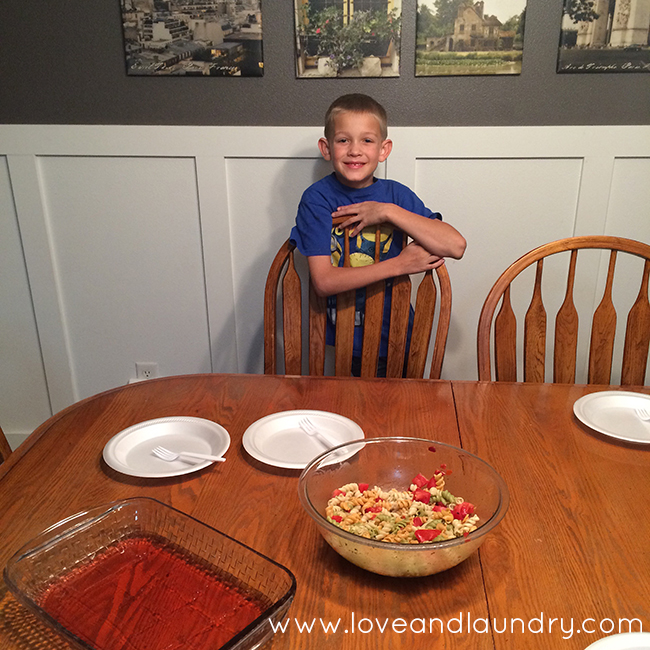 Dave has a videography company and he got hired to film all the coaches footage and do a highlight video for one of the local high school football teams. Dave is really one of the busiest people I know and I learned a long time ago that if I want to spend more time with him then sometimes I need to tag along. So, I went to as many football games as I was able. It kinda turned into our Friday date night for a few weeks! 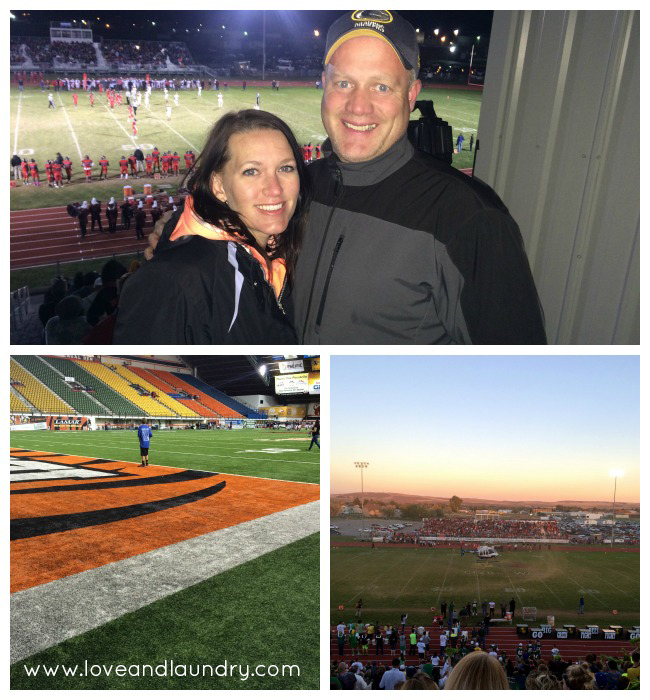 Dave has really taught me to love football and it was fun to watch the games even though I didn’t care which team won and I didn’t know any of the players. One of the games was played on the Idaho State University field. It was a good game, too. And you can bet that I walked my nerdy self down to the field after the game just to feel the AstroTurf. It feels completely different than I thought it would.

Speaking of football, we are huge Green Bay Packers fans over here (Go Pack Go!). One of our favorite things to do as a family is cheer on the Packers! Max has been begging for a Packers jersey. Begging may be a bit of an understatement. I have been searching high and low to find one that wasn’t crazy expensive. Jerseys are so expensive – sheesh! It’s just a shirt, people! I know….branding, blah, blah. I finally found one online at Wal-Mart for around $25, bought it for Christmas and stashed it away in our closet. And then Red Ribbon week came around at the schools and one of the days was Jersey Day. So, Dave convinced me to pull it out and give it to Max early. And I’m so glad we did. That kid was over the moon excited about it! I think if we had saved it for Christmas, it would have gotten lost in with the toys and may not have felt as special. 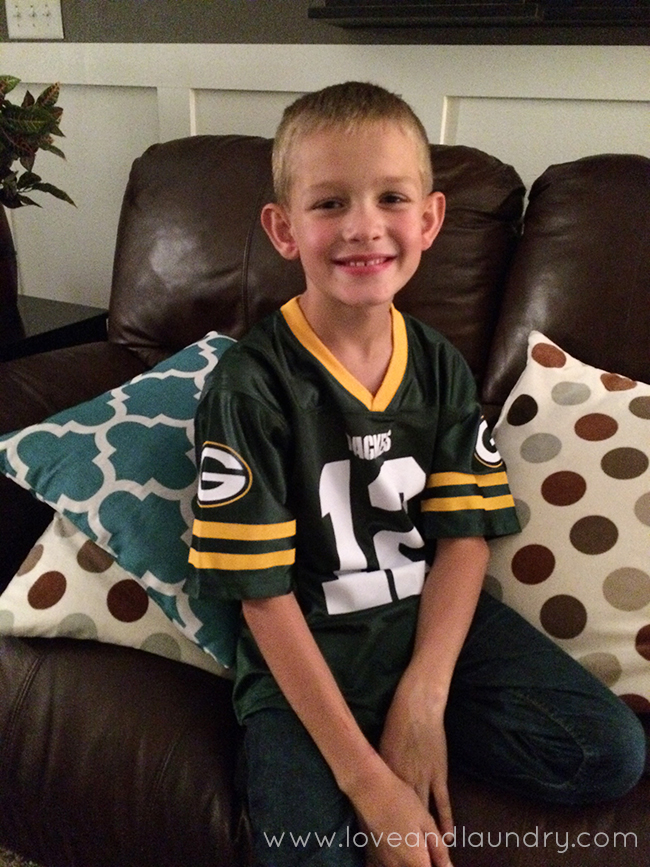 (I think I need to stop taking so many pictures with my phone! Not the best quality, but this is real life!) 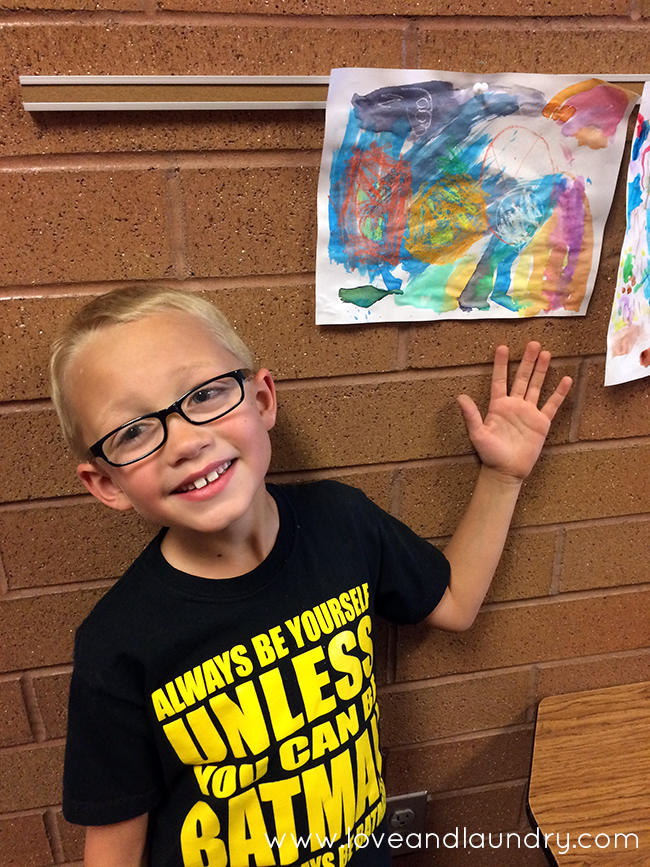 Logan is always the kid I worry the most about. He is so young – he barely made the kindergarten cut off by 10 days. I don’t think it does him any favors to be the baby in our family, either. But that just means he’ll learn to work hard at learning and there is nothing wrong with hard work! Now that he’s in first grade, I want to make sure he gets completely caught up in reading. He has made leaps and bounds so far this school year and has worked like crazy to read everything he can. I had forgotten how much fun it is to watch a child learn to read. At the rate we’re going, I think he’ll be reading like a pro by the end of the school year!

On the same night as PT conference, Bria had a choir concert. This was her first and I have a feeling there will be many more to come.  She loves choir! 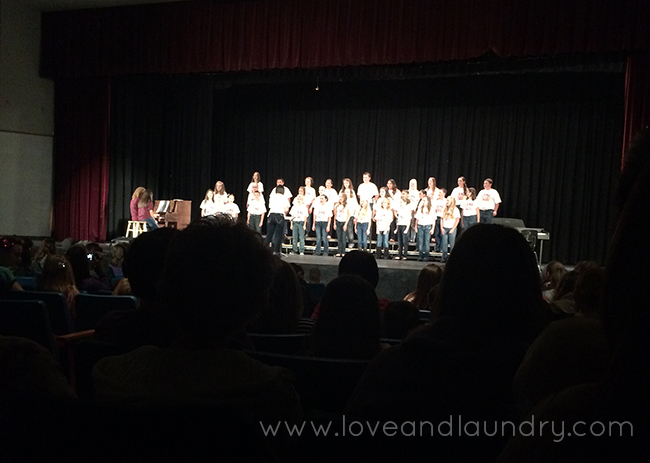 I also volunteered to help out at Logan’s class Halloween party. I signed up on Back to School night and the teacher put instructions on the sign up sheet asking to indicate if it was okay to share our contact information. Apparently I was the only person who read the instructions right and was the only person who agreed to have my contact information shared. So he asked me if I would mind coordinating the whole party. And to be completely honest, I love that kind of thing so of course I said yes. It was my first time putting the whole class party on. I definitely learned a few things and if I ever am put in charge again, I’ll run it a little differently. But, all in all, it was a success and the kids had a great time! The best part of helping was getting to see what Logan’s days are like (at least a glimpse). I forget how much time they spend with their teachers and their friends every day and it’s nice to know that he is going to a place where he is taken care of and people love him. He really has a great class this year! 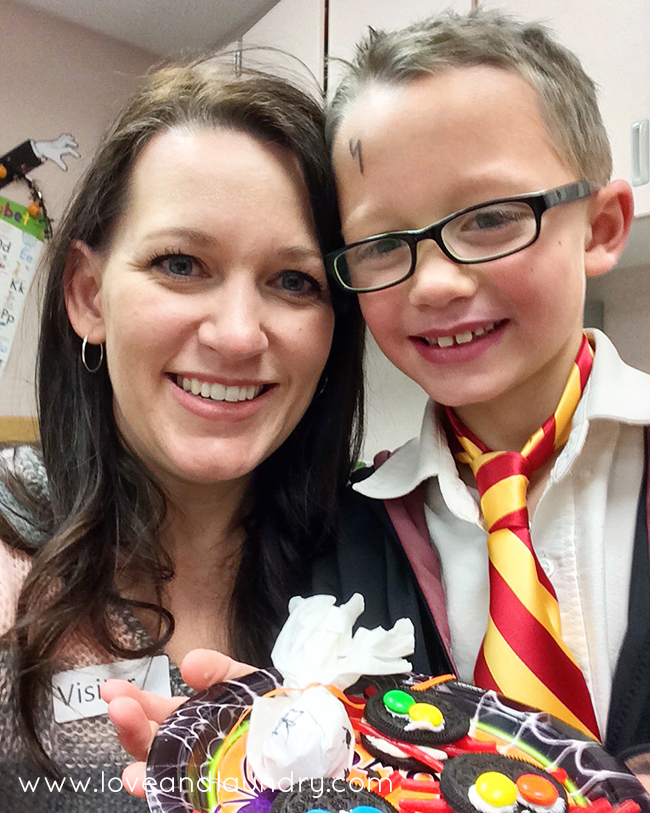 Other than Halloween (which I’ll do in a separate post), that is more or less a highlight of our October! And I am super excited for November to be here and for the holiday season to start!